Learn About Our Accredited: 
At our marijuana rehab centres, we offer the most effective treatment for those who suffer from cannabis addiction.

Many people throughout Canada use weed recreationally. It is often seen as a harmless drug.

However, persistent use can have serious negative effects, including addiction. There is a common misconception that weed is non-addictive. While it is not as addictive as other substances such as heroin or cocaine, it is absolutely possible to cause an addiction.

Although not considered as dangerous as other recreational drugs, weed dependency and abuse is a very real problem that can take just as heavy a toll on users and their families as other addictions.

Our marijuana rehab centres, located in Toronto and Ontario, provide you with a safe and effective way to get help coping with your addiction and concurrent mental health problems.

At Trafalgar, you will receive a personalized and effective treatment program to help you recover from marijuana addiction.

A New Alternative to Residential Treatment.
And yes, it works.

Some people get easily addicted to weed after using the drug frequently, and they might need to smoke more of it to maintain the same level of reaction.

People who are trying to quit using weed on their own without treatment may find themselves frequently in a bad mood, feeling intense bouts of anxiety and nervousness, dealing with persistent insomnia and feeling a strong need to take the drug, these are some of withdrawal symptoms.

Why You Should Learn How to Fight with Marijuana Addiction

People use marijuana for a variety of reasons, from relaxation or social recreation to its medicinal effects. Once a person has come to depend on these effects to the extent that they cannot function normally without weed, they may require professional support to stop using.

Cannabis addiction can have a range of debilitating effects on a person’s life. Sustained use can harm a person’s mental health and can damage their relationships and professional circumstances.

Abusing weed or pot can result in problems with memory, comprehension and mood, and poor social behaviours. It can interfere with one’s personal and professional life and other activities.

Research has shown that weed’s negative impact on learning and memory can last for days or weeks at a time after the effects of the drug wear off. As a result, a user who smokes weed daily may be functioning at reduced intellectual levels much of the time.

Marijuana rehab is an important step if you’re struggling to find out how to quit smoking weed even after you try it yourself.

Trafalgar offers the best treatment for weed addiction available in Toronto and Ontario.

We use evidence-based, client-centred methods that give clients the strongest possible foundation for recovery through our inpatient and outpatient clinics.

For those who want to get cannabis addiction treatment in the comfort of their homes, we also offer virtual programs.

As many people struggling with addiction are also dealing with mental health issues, we also provide expert treatment for concurrent disorders.

At Trafalgar Addiction Treatment Centres, our personalized approach to treatment and recovery goes above and beyond the standard of care to provide you with long-term support and guidance on your road to recovery from cannabis.

We help find the best weed rehab option for you and support you through unique therapy methods that are adapted to your personal requirements.

We utilize cutting edge technologies like Cue-Exposure (VR) (Not available due to COVID-19) and offer therapeutic approaches such as:

We offer Cannabis Rehab Programs through:

Trafalgar Residential Facility provides 30, 60 or 90-day residential treatment for weed addiction and offers the most comprehensive and effective cannabis addiction treatment and mental health program in Canada. We treat the addiction along with the underlying mental health issues like depression, anxiety, PTSD and other psychiatric disorders.

With our unique and effective weed addiction recovery and mental health programs, we can make sure that your road to recovery is safe, effective and tailored to your precise needs. We are dedicated to helping you overcome your struggles. If the Intensive Outpatient Program does not fit into your schedule, or if you need to focus on a specific area of concern, we will tailor a program for you based on your schedule, needs, and budget.

You can also enrol in our Online Addiction Treatment for Cannabis and still recover from weed with a comprehensive and structured program. The best part of our secure, end-to-end encrypted telehealth platform is that it allows you to complete the program in the comfort of your home, on your own terms.

While recovery can never be guaranteed, Trafalgar provides clients with the best possible foundation for lasting sobriety.

As recovery is a lifelong process, we also provide all our clients with access to specialized lifelong aftercare support through our Aftercare and ContinUcare programs as well as Continuation of Care that help prevent relapses upon graduation from our addiction treatment centres.

Cannabis addiction treatment can be a challenging life period for some individuals as weed creates a very strong both mental and psychical addiction if consumed on regular basis. So, support for our clients goes on long after initial treatment is completed.

You will receive cannabis addiction treatment from the very best.
We have a team of accredited professionals who have many years of clinical and research experience.

A Webinar About Cannabis Addiction Facts 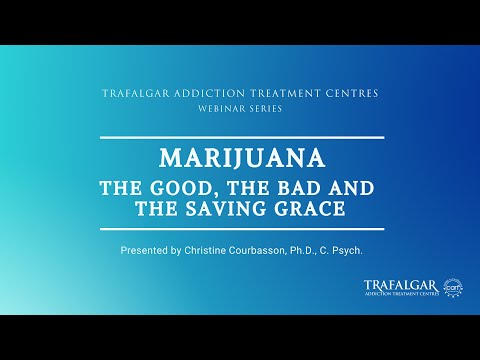