By Trafalgar’s Editorial Team
This Content is Reviewed By Kinga Burjan, M.A., R.P. 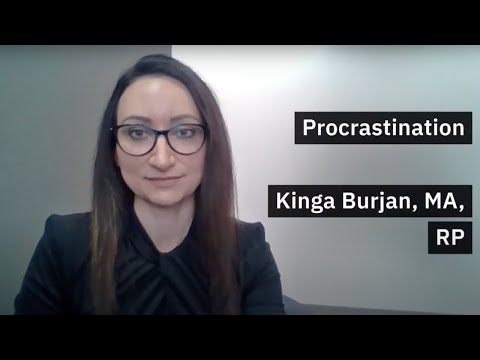 What does it mean to procrastinate?

It means to postpone or delay actions, for example, I’ll do my homework later or I’ll start exercising next week or I’ll call my grandma on the weekend instead of today. These are a few common examples of procrastination.

Procrastination is actually a self-defeating pattern that provides relief in the short term, but it leads to higher levels of stress and consequences in the long term.

Procrastination is shown to negatively be associated with health, income and overall wellbeing levels.

Take a moment to pause the video to write these down. Now, the following slides will be reviewing factors that can lead to procrastination.

Boredom. So having a lack of interest in tasks makes it much more difficult to follow through, even with small tasks.

Having a low mood, so having depressive symptoms or feeling down can create a cycle of not wanting to actually get something done and perhaps being stuck in thoughts and reasons as to why we shouldn’t do it.

Lack of energy can be associated with a depressive mood, but sometimes we’re just tired and it might feel actually painful to get a small task done if we’re overworked.

Impulsive individuals are more likely to give up. So this might sound counterintuitive, but if someone’s impulsive and they’re not feeling like doing it, then it’s easy to jump onto that bandwagon and just say “I’m not going to do it”. However, if someone’s in a good mood and they’re impulsive, that might be a good time for them to get up and get it done.

Having a goal that’s too far away or abstract can interfere with getting it done because it’s just difficult to imagine that we can actually get to this goal.

When the task seems a little bit too difficult, then we can tell ourselves that we can’t do it or we’ll just do it tomorrow and we might even start feeling overwhelmed by getting this task done.

Using substances actually interferes with our thinking process and our mood and can affect our functioning and all of these factors contribute to procrastination.

I’d like you to think about any other reasons that you might procrastinate. For example, perhaps you’ve been wanting to film a video, but every time you go to do it, you feel anxiety. Perhaps that anxiety is feeling uncomfortable in front of the camera or fear of judgment or maybe fear of not being prepared enough.

Whatever that is, take a moment to reflect on situations and why and what underlying reasons led you to procrastinate.

Now, what can help prevent procrastination?

Having enthusiasm, energy and attentiveness to pleasurable things, as long as they’re not harmful to you, can actually motivate us to get that task done.

So shifting your mood in some ways, such as putting on an energizing piece of music, doing jumping jacks, petting your cat, whatever that is, that shifts your mood and energizes you can be helpful and taking that next step to get that task done.

The perceived value or outcome of this goal, the more valuable it is to you, the more likely you’re following through to get the task done.

For example, if you expect that going to the gym will actually make you feel better, you’re more likely to put the effort into exercise. If the expected values are clear to you and they seem valuable, you’re less likely to procrastinate.

The closer a goal feels to you, the more likely you’ll get it done and less likely to procrastinate. So this is the opposite of the distant goal.

Intrinsic motivation means performing in action or behavior because you actually find some pleasure within the activity itself. Whereas acting on extrinsic motivation is done for the sake of an external outcome.

For example, someone who likes helping others may do the action without an extrinsic reward because they’re intrinsically motivated, whereas someone who’s extrinsically motivated might just do it for praise or volunteer. It doesn’t mean that extrinsic motivation is bad. The point is, that intrinsic motivation means the person is actually more likely to get the task done and less likely to procrastinate.

To develop intrinsic motivation, you must increase your point of interest in the tasks involved to get to your goals.

So taking a moment to look at your long-term goals and then from there generating short-term goals that lead to these long-term or distant goals.

Now, I suggest this week that you pay attention to what activities or goals that you might be putting off. Once you find a goal or action that you’re delaying, complete the following analysis.

Identify what goal or activity you’re actually doing. What’s the expected value of completing the goal? Are motivated by intrinsic factors or extrinsic factors?

What are some other factors that might be leading to your desire to procrastinate, such as maybe your mood or your thoughts or the difficulty of the task?

And think of some ways that you can interfere with the procrastination of this task. Perhaps you want to go for a walk every day but find it very difficult, perhaps asking your spouse and making a date in the morning. So you have an accountability buddy, to help you follow through with the task.

Remember, it takes one step at a time to move forward.

There’s no rush, so please take time to reflect. The more self-awareness you have, the better decisions that you can make. I wish you well.

Related:
– Goal Setting
– Meditation for Manifestation
– Motivation: What is Your Why
– Motivation

Our Substance and Process Treatment Programs