CBT with An Example

Resources >> CBT with An Example By Trafalgar’s Editorial Team
This Content is Created By Kinga Burjan, M.A., R.P. 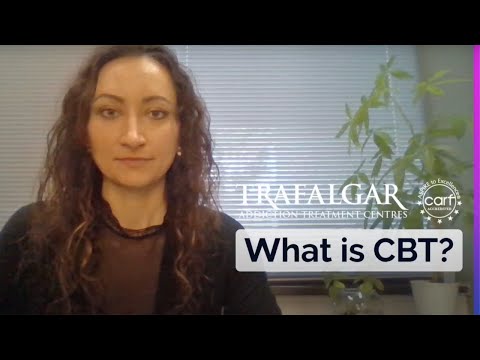 Today’s topic is a brief overview of what CBT is, followed by an example of one of the processes in CBT that hopefully, you can apply in your life as well.

So, what is CBT? It stands for Cognitive Behavioural Therapy, and it was developed by a psychiatrist named Dr. Aaron T. Beck in the 1960s. So the psychiatrist set up a bunch of experiments using psychoanalytical theory to address depression. And he discovered that he could help patients identify and evaluate automatic thoughts that they were having that contributed to the depression.

By doing so, he learned that patients were able to think more realistically and this resulted in them feeling emotionally better and also behaving more functionally.

So an example of separation anxiety is, in Sam’s case, her skipping school because she has too much anxiety to leave her mom. So CBT will actually ask the person to describe the situation. In Sam’s case, she said I was going to school, but then I knew I would have to leave my mom at home. And I thought maybe something bad would happen to her and it would be my fault because I left, so I decided to stay.

Essentially, if a clinician or client starts to look at and identify their own thoughts, this can lead to better feelings and behaviours. We’ll go through a basic process of uncovering how recognizing thoughts and feelings can result in behavioural change.

Another thought Sam has is she can’t do this on her own, she is not strong enough. And something bad will happen if she goes.

So now let’s start with identifying the strongest emotional response she has with one of those thoughts just so that we can narrow down, what we shall start with. In this case Sam felt that the thought “I can’t do this on my own, I’m not strong enough” was the strongest spot out of those three.

Now we’re going to ask Sam to look at the evidence of why this thought is true, because there obviously is some evidence or she wouldn’t believe it.

Some of the evidence that comes to Sam’s mind is in the past she’s messed things up on her own. She noticed that when she leaves her mom, she actually feels scared and anxious, so to her, that indicates that something’s wrong and her hands actually start sweating.

Now we’re going to ask Sam to look at any evidence against this thought. So Sam recognizes that the majority of time, actually nothing has happened to her mom when she left the house. And she also acknowledged that she’s actually able to get tasks done even when her mom isn’t around.

And then worst-case scenario, Sam realized that both of them actually have a cell phone and they can call each other if something bad happens.

After looking at the evidence for and against this thought, we need to look at creating more balanced thought. So Sam came up with a balanced thought of “I feel scared when I leave the house, but I know that I’ve left the house in the past and nothing bad has happened”, and “I know that if I go to school, I can actually accomplish things of value and feel good about myself.”

So going through this process with Sam, with her thoughts about the situation and also for yourself, you might start noticing some underlying themes of when and how these thoughts arise. Perhaps there’s a theme of a feeling like you have a lack of control or a feeling of not being good enough.

That drives these thoughts and prevent you from following through with actions that will actually benefit you. So Sam chose to follow up with a therapist to explore why feeling like she’s not in control is scary for her and what it means for her to be good enough.

So generally, these patterns of thinking come from learned behaviour or in this case with Sam, attachment styles in early childhood.

If a situation has made an individual distressed and they’ve learned a way to avoid that distress by not engaging in the behaviour, such as in Sam’s case, she’s avoided this feeling of distress and anxiety by not going to school.

Then the more you avoid it, the less opportunity you have to prove that you’re unhelpful thoughts might be wrong or to put them on trial. You’re not giving yourself a chance to actually have a balanced thought.

I suggest you review these homework charts with the therapist until you’re comfortable using them on your own.

Life is about learning, so every day, if you can learn a little bit about yourself, you’re moving forward.

Our Substance and Process Treatment Programs